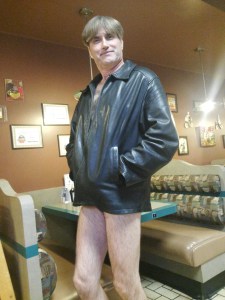 This is Rolf. Rolf is a 50 something gay man who is proud to be himself. Rolf is not worried about what you think of him

and that’s a good thing. He told me he chooses to wear the outfit you see here along with what you don’t see, black leather

short shorts and combat boots, because that’s what makes him feel comfortable and unique. It’s a style he’s loved since the 70’s and 80’s.

Now there is more to Rolf than just his manner of dress. He’s outgoing,very friendly and very sociable. Something I imagine most

people wouldn’t get to know if they avoided him by the way he looks, which brings to my mind many other people I’ve known in

the past who have been judged on appearances alone. People who’s handicap, skin color, body size, manner of dress or looks

preceded any notion of who they really are. We are all guilty of it, we’ve all made snap judgments about someone meet for the

first time whether for good or bad. This is instinctual, buried somewhere in our long forgotten ancestral past. Humans have a pack

mentality, we are after all animals. Birds of a feather flock together stuff. Whole societies have and still do hold to that mentality,

some with hatred and murderous outcomes. My way or the highway by force is necessary.

Most of us spend our lives trying to live up to the standards our parents and cultural expectations put up before us, whether

It’s religious beliefs, manner of dress or social attitudes. For someone born with a creative and unique mind, who like to step

outside of the box society expect us to live in, this is stifling. We have all heard the stories or even known someone who became

what their parents expected instead of what they really wanted to be for fear of rejection, disapproval and disappointing others.

When we limit someone to our standards we not only do them a disservice we do ourselves the same. The next Picasso could be

perishing behind a desk pushing buttons on a computer instead of creating a beautiful masterpiece. The next great inventor is not

taken seriously because of a society that in it’s collectiveness, is not ready to accept someone’s ability because of their handicap.

Yes it’s true sometimes we hold up a person to praise and awe because despite their disability, they accomplished something fantastic.

That in itself is a shame. How hard did that person have to fight to be accepted and how many more did we turn our backs on not even

wanting to give them a chance.

Acceptance of others is not easy, acceptance of ourselves is even harder. When I look in the mirror I sometimes play the what if game?

view, would I be as happy ?or would I feel all the life slowly being sucked out of my soul trying to conform to someone’s expectation of me.

How do I and can I win the inward struggle to accept myself warts, wrinkles, fat and all. 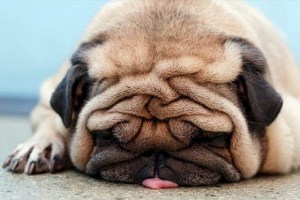 Now I’m not saying to do this we all need to wear leather short shorts and combat boots, unless of course that’s what you like. I’m not saying

ditch all of the conformist attitudes of society, they are there after all for our own well being. Rules bring order to chaos and laws make sure we

don’t get to out of hand. I for one don’t want to go to work in an anything goes environment, nothing would get accomplished, but I also don’t

want to be defined by others by my outward appearance, handicap or the job I do. What I am hoping for is not only to have the freedom to be

me but the acceptance to be me by others even if they don’t like me or what I do or stand for.

To have this I have to first accept the Rolf’s of the world and celebrate the art of being.

Here’s hoping all of you can do the same.